Can science and art co-exist?

Today we’re going to tie the concepts of; coding, renaissance rivalry, punch-ups, golden shapes and reproducing rabbits all together – because maths wouldn’t be the same without it.

Now a long time ago (I was 9) my dad tutored me to prepare me for my exams at 11. Everything was a challenge, but that if you understood the rules, you could follow those rules. Non-verbal reasoning appealed to me. Maths made sense even if I didn’t understand it yet.

Maths underpins all science- physics, chemistry and biology- (in that order) and that underpins all life. Yes it is massive but then, have you seen the universe lately?

So, this week I am going to teach myself R.  If you already know what R is, you are already 100% more knowledgable  than I was when I said I’d learn it. But in all things, sometimes its wise to be ignorant, pretend we know nothing and start small.

For those of you who don’t know what the heck I’m taking about, its a coding package of nightmares for the fainthearted. I have had to get out ‘R for dummies’ from the library to help me translate the ‘coding speak’ that is so common to the up and coming tech-savvy generation. I have also gotten an app called datacamp  https://www.datacamp.com/courses–  if you’re interested. The millenial generation have so many tools that we never had, and well done them for bothering to facilitate their own learning.

Where am I going with this? In the R learning package they utilise something called the golden rule : 5:3:2 as if it were assumed I knew about this fundamental piece of knowledge. Its  something called the Fibonacci sequence which I had heard about. A bit. Spirals in shells and stuff.

First let’s put this all in context and I’ll tell you what I know.

Firstly, Fibonacci was Pisano- from Pisa- about 500 years ago and Fibonacci was a nickname.  Pisani were/are mortal enemies of the Fiorentini- who say,

“Better a death in the house than a Pisano on your doorstep”.

To say that people from Florence (some say the cradle of the renaissance) really didn’t like people from Pisa was an understatement.  short video about Fibonacci.

So, here’s the sequence:

No. Everything has a ‘Why?’

Think of yourself as a little robot who has an infinite pile of bricks to make into a wall. the little robot collects the  bricks to build a wall (like WALL.E) and has a really, really short term memory, so you can only remember the last thing you  did and the  time before that.

It is all based around the relative numbers of your bricks: Ultimate and penultimate.

So you assemble your wall……..

Then you begin again,  assessing how many bricks you just used  and the time before that. Each time the number of bricks will increase by a certain value and that value is a Fibonacci number. Its logical. Its a self perpetuating cycle.

The  numbers of bricks used each time relative to each other are a certain size/volume/shape and this brick building thing is perpetual.

It is these 2 facts;

that creates repeating patterns in plants and flowers when their structures are first developing at a microscopic level.

Most plants have: petals, leaves, pips, centres etc that add up using this principle of Fibonacci, which is why they have such lovely swirls (check out the maths of the swirl below).

So now for what may seem like a  weird bit.

If you divide one of those  Fibonacci  numbers with the number before i.e 55/34- you will always get THE SAME NUMBER!!!!!!! 1.6183– this is not magic but simply that your are always increasing your brick number by the ultimate and penultimate number bricks, so the ratio is alway the same. However, it is called a Golden ratio–

So, Fibonacci explained it in terms of rabbits. 1 rabbit boinks 1 rabbit to make 2 rabbits. How many rabbits there would be in a field if they never died? If they mated once a month, they had one male and one female offspring each month, and all their offspring mated with each other- you’d get these numbers.

The Golden ratio is known as many names, PHI(named after the Greek Phidias who built the parthenon)  but I’ll stick with ‘The Golden Ratio (8:5, 89:55 or decimally 1.6183)’, named perhaps because things built this way as such are so aesthetically pleasing. It has been used relentlessley in art, architecture and anatomy i.e length of face:width of face; length of body: distance to navel) and was a concept that was kicking around since before Fibonacci.

This magical ratio is found in the pyramids at Giza, the acropolis in Greece and the Parthenon- Great website examining golden rules in famous buildings. Let’s face it those ancients were enlightened- (then came the dark ages, which is why the renaissance is called the rebirth).

I’m just going to explain the shell curve thing today- as this is visualised most easily.

You know you like the curve- but why? Well, because it is  mathematically sound. 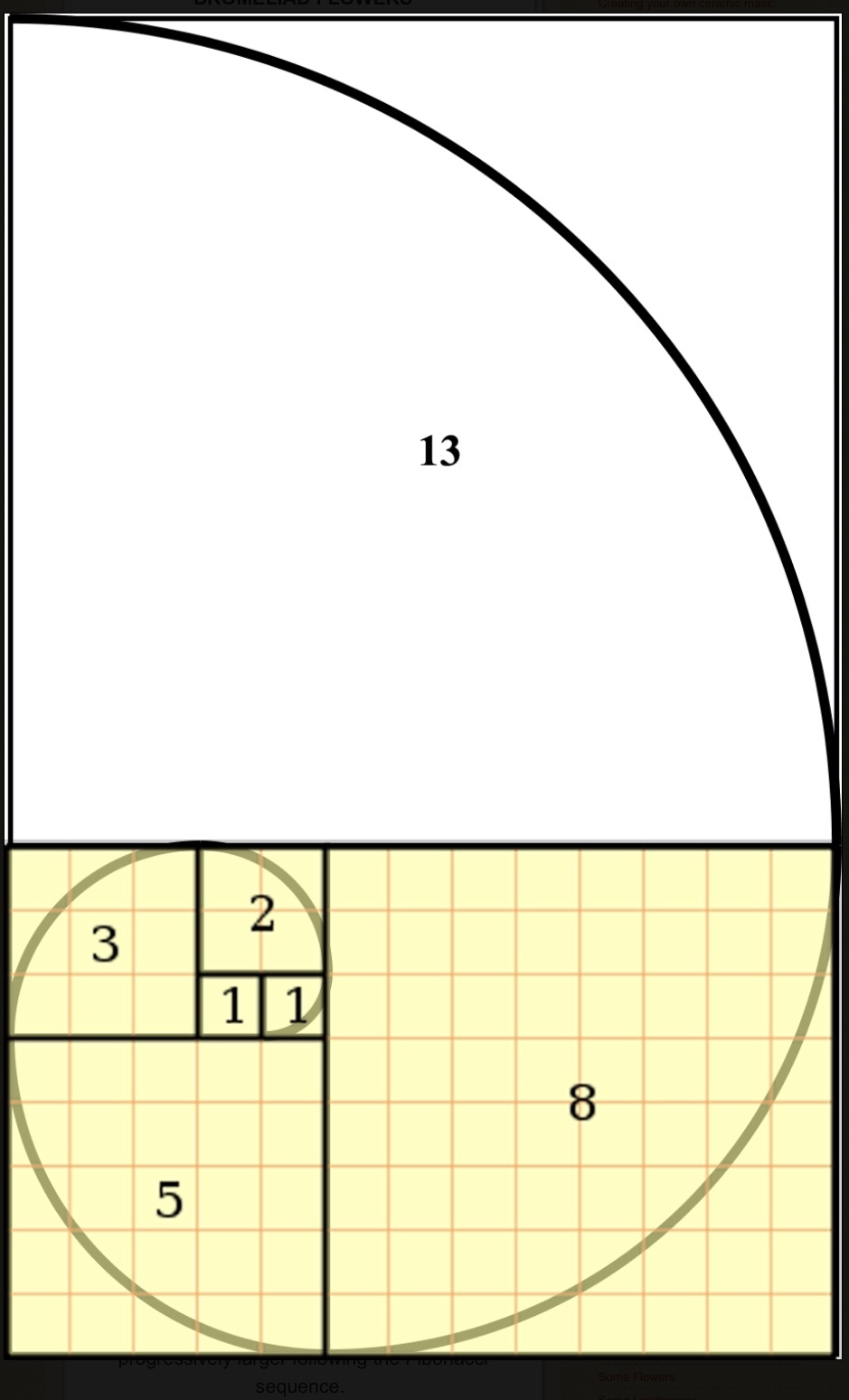 Recognise the numbers yet? Also, look at what the numbers in the boxes represent and where where the curved line intersects.

Homework………….The next time you’re bored, in a meeting or a class,(you know the ones when maths is more appealing than listening)- try drawing this curve out. Alternatively, watch this video- it is just lovely spirals and doodling in class,

Now, most renaissance art had golden rules somewhere within them, and scenic layouts follow the shell idea of aesthetic perfection . This  has been applied to recent photography and deconstructed quite beautifully.

Applying renaissance principles to a punch up

You can also make a ‘golden’ pentagram and a pentagon using these dimensions- essentially they’re all mathematically sound, and very, very pleasing to the eye- this time it’s to do with the angles they use- but we won’t go into that here.

At this point historically, obviously I’m paraphrasing, but with Leonardo ‘Fibonacci’, Leonardo Da Vinci, Michelangelo, these objects are everywhere. Da Vinci called it the ~Divine proportions and can be found marked out in ‘Vitruvian man’. More modern artists have also adopted this- the artist Mondrian being the most obvious. Essentially, look for it and you’ll see it.

Leonardo Da Vinci, who died 500 years ago this year was an exponent of all things artistic and scientific. Art and science were not exclusive and once you begin to see science and art from that point of view, the more any of what I am talking about with respect to beauty in science starts to  makes sense, even 9 year olds.