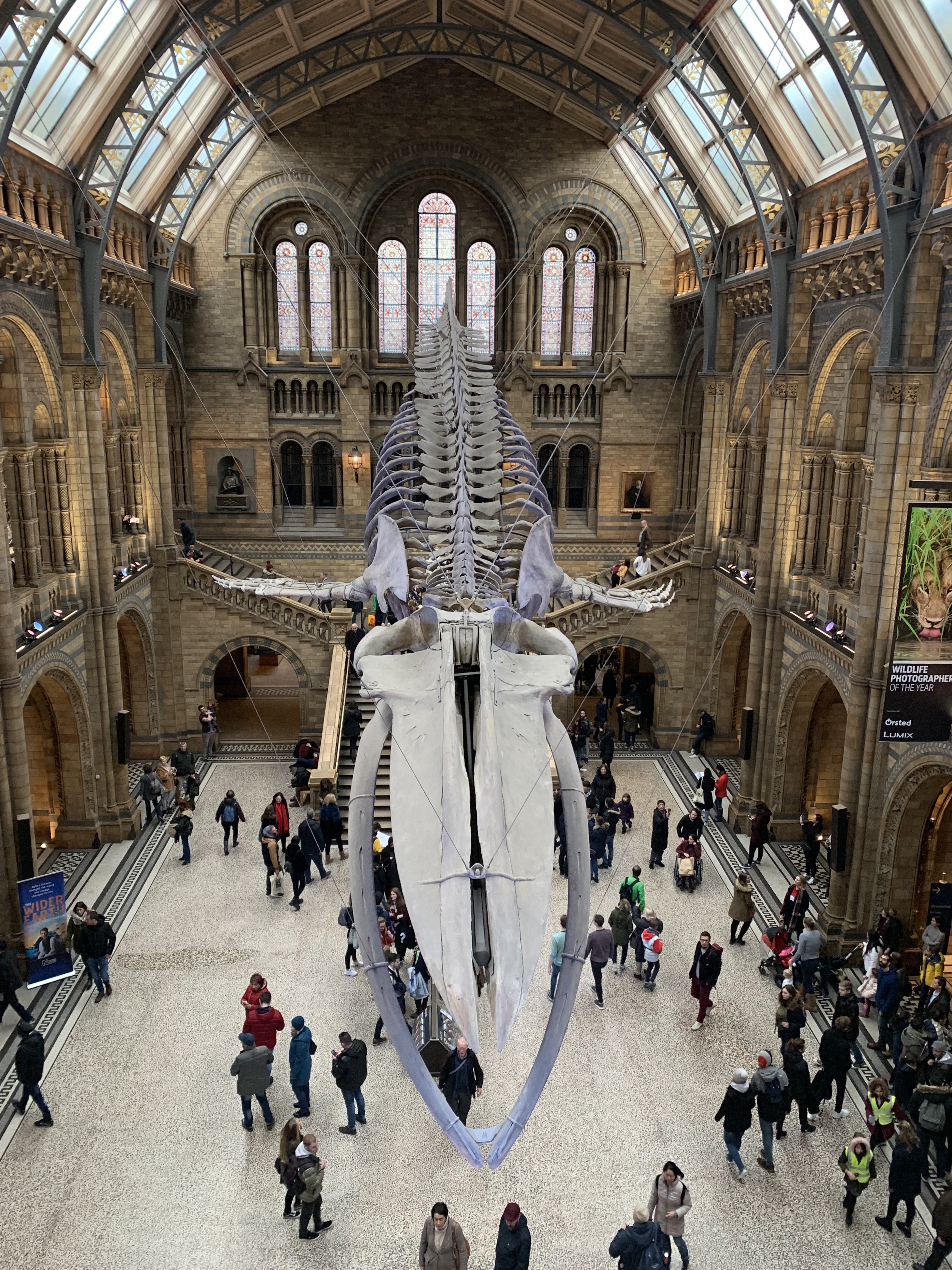 The Natural History Museum, South Kensington, (London). If you’ve never been, you should go. If you’ve not been lately, go again.

This is one of those buildings and establishments that I can never get enough of. To say that I am in love with this building would be an understatement. If I could have a perfect job, it would be here, I don’t know doing what- but this place is literally, beautiful science.

So if you’re in South Kensington, kicking your heels, pop in for half an hour. It’s free after all. 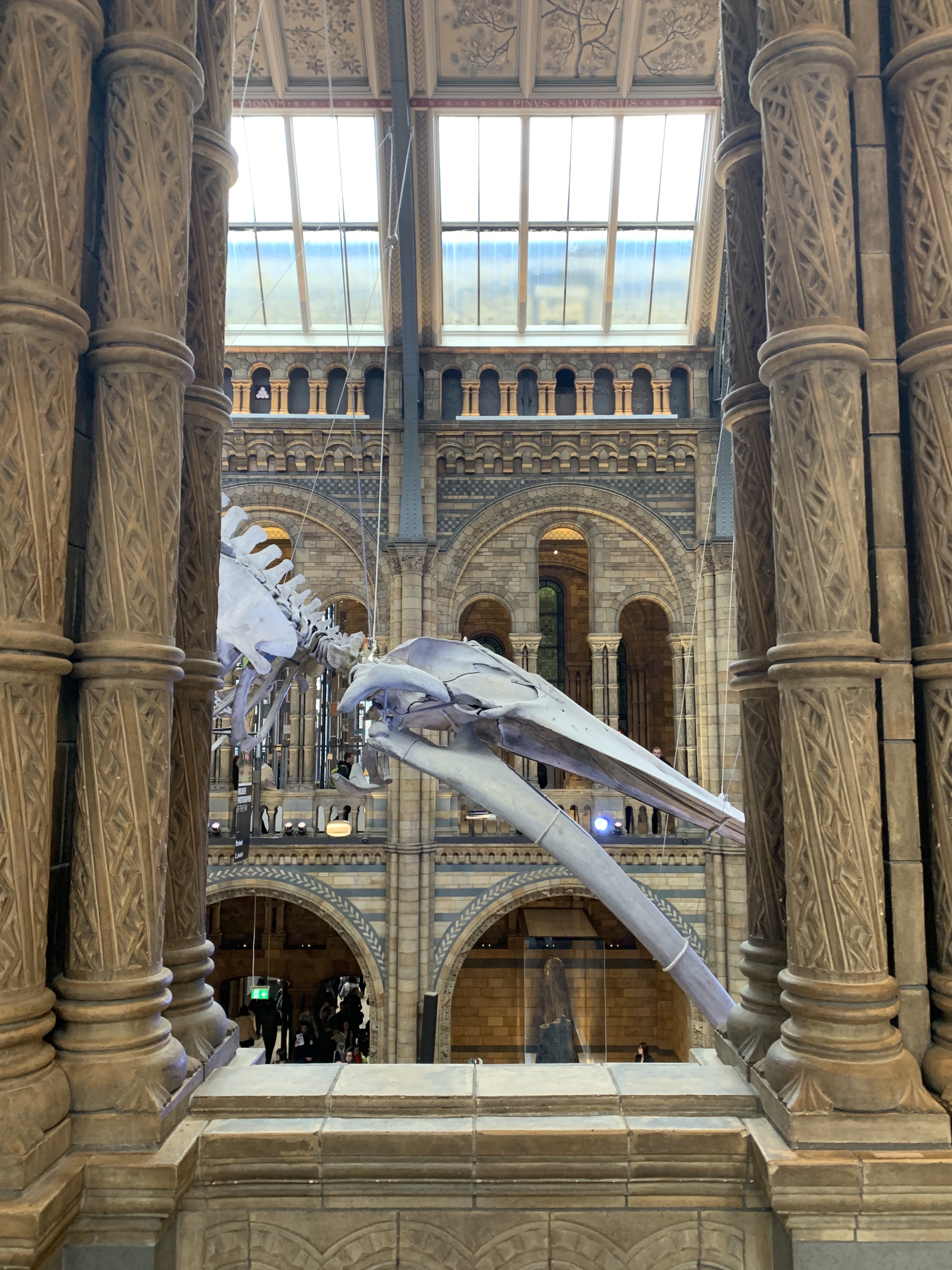 Yes, there be giants of all sorts, I mean there’s a hulking great blue whale skeleton hanging from the ceiling, but I wanted calm today.

I had decided to meet one of my old PhD students for lunch, now an incredibly successful researcher at the NHLI at Imperial College, round the corner.

We wandered through gemstones, meteors, crystals and chatted overlooking a stegosaurus fossil.

In The Vault, aside from the precious stones, were all the types of crystals and rock formations and there were so many amazing colours. ( A valuable  trip for when I get to telling you about the chemistry of colour).

I stayed on after lunch to lead to the Darwin centre, also containing The Cocoon. 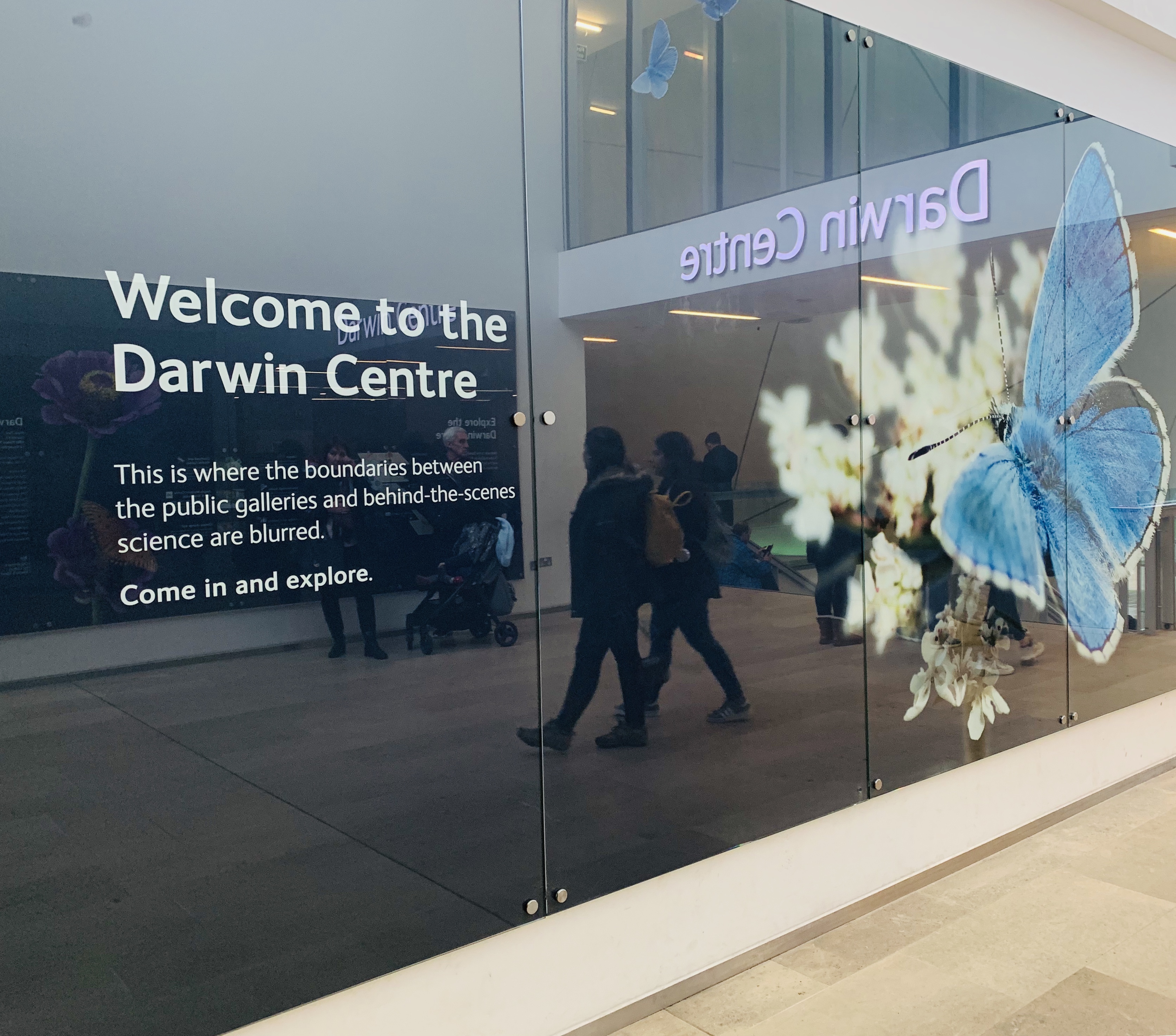 I suppose a lot of people don’t find a white cocoon of tranquility and beauty as sexy as a simulated earthquake or the fossilised bones of a terrifying predator that lived 35million years ago, but inspiration often comes in moments of quiet.

It showcases the work researchers do, even having windows overlooking their labs- which must be disconcerting for the poor researchers. 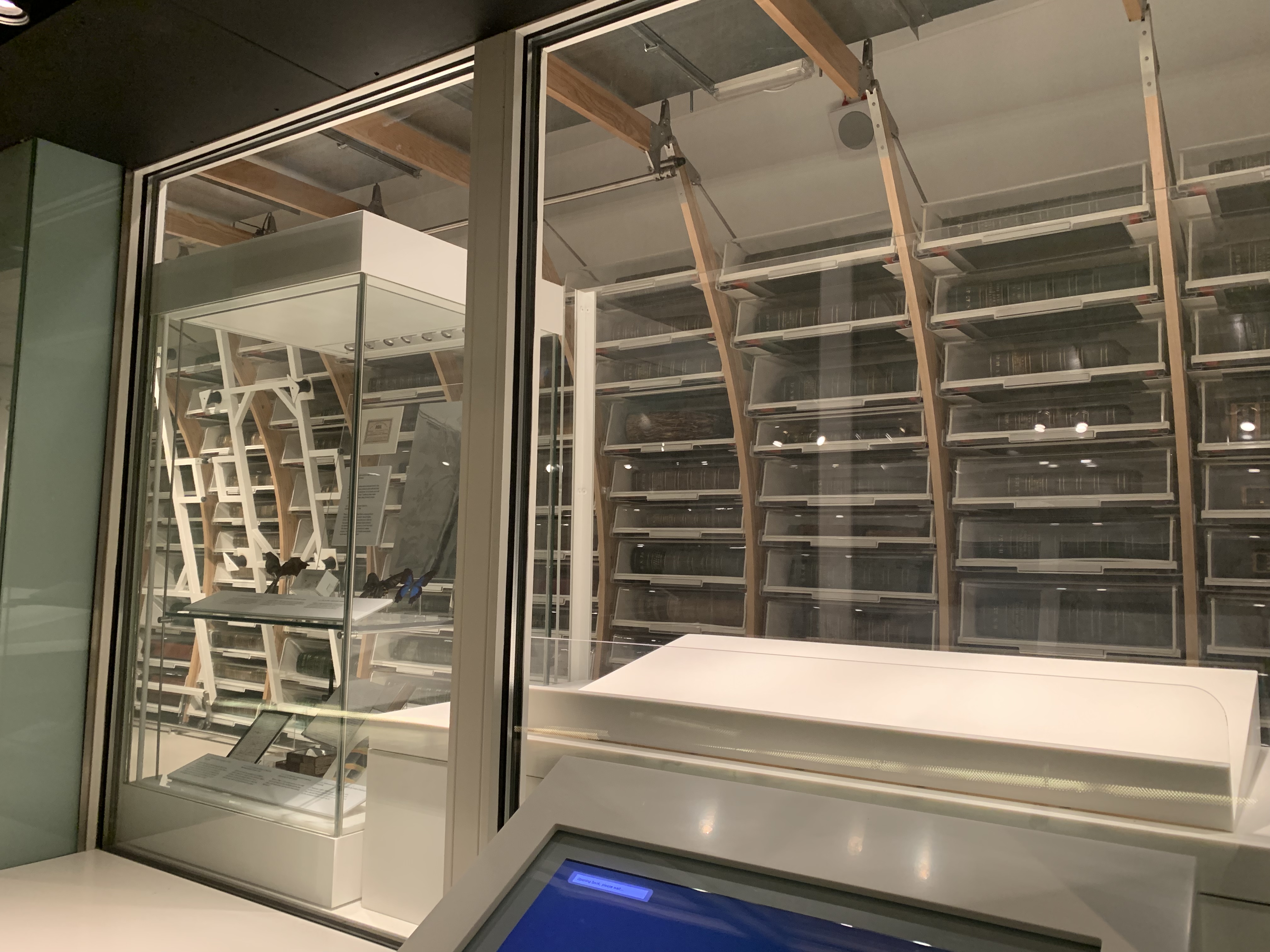 It looks at the ordering, investigation and analysis of species and specimens. It shows the work that current researchers are carrying out, the expeditions and  why they’re taking them. 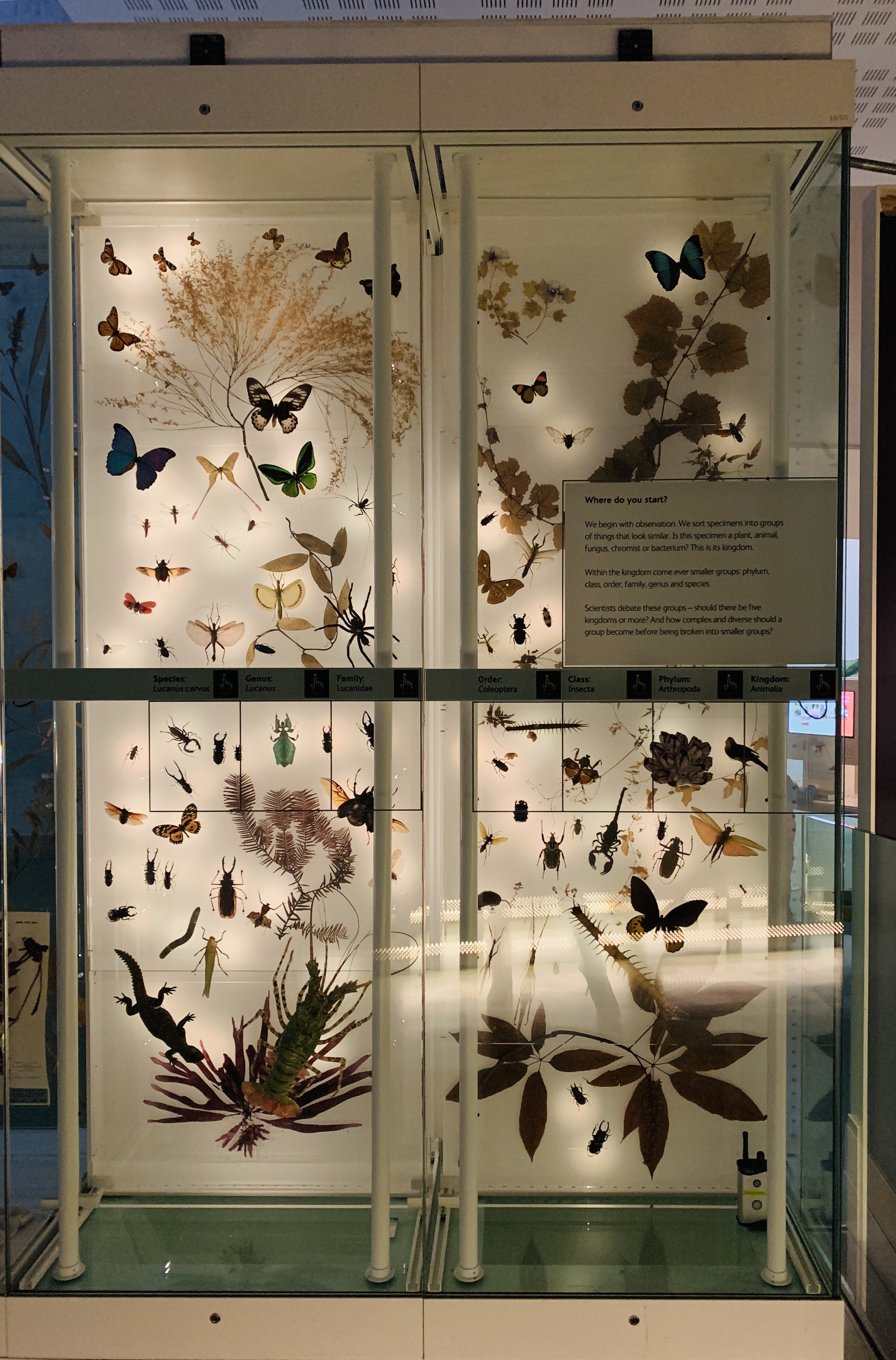 This for me is natural history at its finest. Promoting new discoveries and outreach programmes. If you can dip in and out of the museum, then I recommend taking bites at a time. It can be overwhelming if you don’t.

All of this organisation of plants and animals into a taxonomy and a Tree of life was espoused by Darwin. Part of Darwin’s work on his hypothesis of the Origin of Species  however, was based around close observation of chaffinches. How on earth do you get a lightbulb moment from a chaffinch? 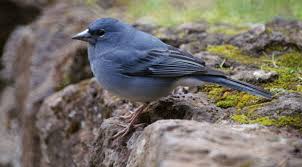 Following his voyage on The Beagle (1831-1836) to the Galapagos islands at the age of 22, (life expectancy  in those days was 40), Darwin had collected many bird specimens, and travelling from island to island was initially interested in geographical distribution of the bird types.

When he returned, with the help of an  ornithologist, he discovered this important finding: That rather than a variety of bird (he was looking at mocking birds), that in fact each island he had travelled to had a different SPECIES on it. He then went back, probably quite excited, to the original data collections and asked all the other people from the expeditions, for their information,  trying to reconstruct locations from where he had discovered the different species and piece together what was going on. What was going on?

Firstly: If you’re asking yourself whats the difference between a ‘variety’ and a ‘species’- well here’s an example:

Photo by Pixabay on Pexels.com

In his first publication, he noted only superficial structures of the beaks of Chaffinch’s- by the time he wrote his second publication on the same data, he had clearly made more observations, had more  thoughts about it,  processed some ideas  and  had begun to create his own theories about what this all meant.

Seeing this gradation and diversity of structure in one small, intimately related group of birds, one might really fancy that from an original paucity of birds in this archipelago, one species had been taken and modified for different ends.

\Darwin, Charles (1845), Journal of researches into the natural history and geology of the countries visited during the voyage of H.M.S. Beagle round the world, under the Command of Capt. Fitz Roy, R.N (2nd. ed.), London: John Murray.

A species that has been ‘modified for different ends‘ is a really big concept that we perhaps take for granted.  What is more, you see a beak, but for a chaffinch it is so much more. Its a way of eating. Its a way of surviving. Each species ate a different food: Nut, Fruit or Insect. Adapt or die.

It is this small attention to detail, that for many would say, so what?

It’s not everyones cup of tea. That’s fine, it is a tiny beak after all. But accept that Darwin had noted how each island would create enough of  a diverse environment to find only one species there. That species had adapted in order to survive.  It is this attention to detail that artists have that lead to rich observation. Observation not only about the subject but also about the situation.

Darwin also calculated about 10,000 generations were required before the creation of a new species-

I once had a discussion with a student who didn’t believe in evolution. I found this rather unusual in a science faculty, because everything we work on in our modern lives is based upon evidence that  is perpetually challenged. Also, evidence is not a belief and therefore science is not a belief. It just is.

Scientific dogma,  and the process of thinking scientifically, if you are unaware, works on the following principles;

(Did you see the use of the double negative there?)

Now this may seem an uncertain way of going about things, but actually the philosophy of science in this way is what life, the universe and everything is based on. It doesn’t mean that it is wrong it just means that it is not absolute and is not arrogant enough to suggest that this way is the only way.

Until such time that the evidence that we have can be disproved, we stick with what we have (so far evolutionary theory has remained robust).

This is actually nothing new- Good old Socrates first penned it way back in the 400’sBC or thereabouts. Scientific method is Socratic method at its most resolute and nothing you probably don’t already know. 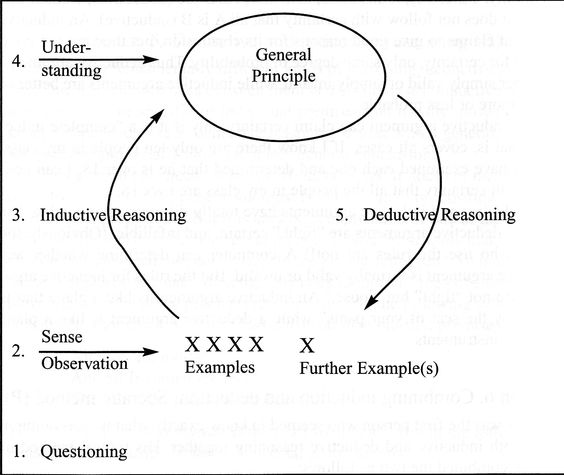 Also, believe me when I tell you, scientists like nothing better than to undermine each other’s work and if they can do so, they will.

This is the basis of the medicines you take, understanding climate change, computers, pretty much everything. The trouble is that the small fact of understanding when and why your experiments are sound, and the interpretation of the data, based on years and years of experience is something that cannot be done after five minutes of reading an article from the internet. This is, in fact, why I developed a university course to enable students to think independently and to question accurately. More importantly students need to improve logic, and skills of deduction and interpretation.see link to Creative Thinking blog

So, the discussion with the student, when it came down to it was that they didn’t believe anything I was saying because I was not willing to say with 100% absolute certainty that evolution is a fact, (based on the fact that nothing is 100% true -see above comments about philosophy) and I would only  say that ‘until such time better evidence comes along to disprove it, this  theory was most probably true’. Until now though, as I said,  there has only been  increasing evidence to demonstrate the theory of evolution.

The student wanted absolutes. People want answers. Science and the philosophy of science does not work like that. If you don’t get  that, fine, but appreciate that all scientific advances have worked in this way.

Even viagra. You know what viagra does- but actually even then, there is a level of uncertainty about its mechanisms and that is why you get with all medicine a piece of paper stuck inside with side effects etc. (Did you know that for some people they get blue blindness?).

Essentially, because in science we utilise the word hypothesis and theory it can be falsely interpreted as the scientist not knowing what they were talking about.

It is a fact that the most ignorant believe themselves the cleverest.

So, Darwin, Steven Hawkins, Einstein, Franklin, Marie Curie  you name them; all scientific advances were made from this Socratic method of moving forwards  with the world.  You don’t just pull some idea from your…. ear  and run with it.

The subtleties and attention to detail that Darwin used  can be applied to the NHM if you pay attention. While you’re being distracted by the dinosaurs and monkeys, look up at the beautiful celings  and look at the building from the outside. When you look they have these horizontal stripes across them,  actually a lot of Victorian houses in London  have them.

I remember being told this a long time ago but can find no evidence for it- so if you can verify it- that’d be great because   en -vogue at that time, (you know what with Darwin and all) , the discovery of dinosaurs, the development of paleontolgy  as a subject (in 1822 funnily enough),  in Victorian times a lot of people built layers into the outsides of their houses to apparently represent the layers from each era found in the earth.  Whether it’s true or not, the NHM doesn’t do subtle. Every brick in the NHM celebrates the theory of evolution. 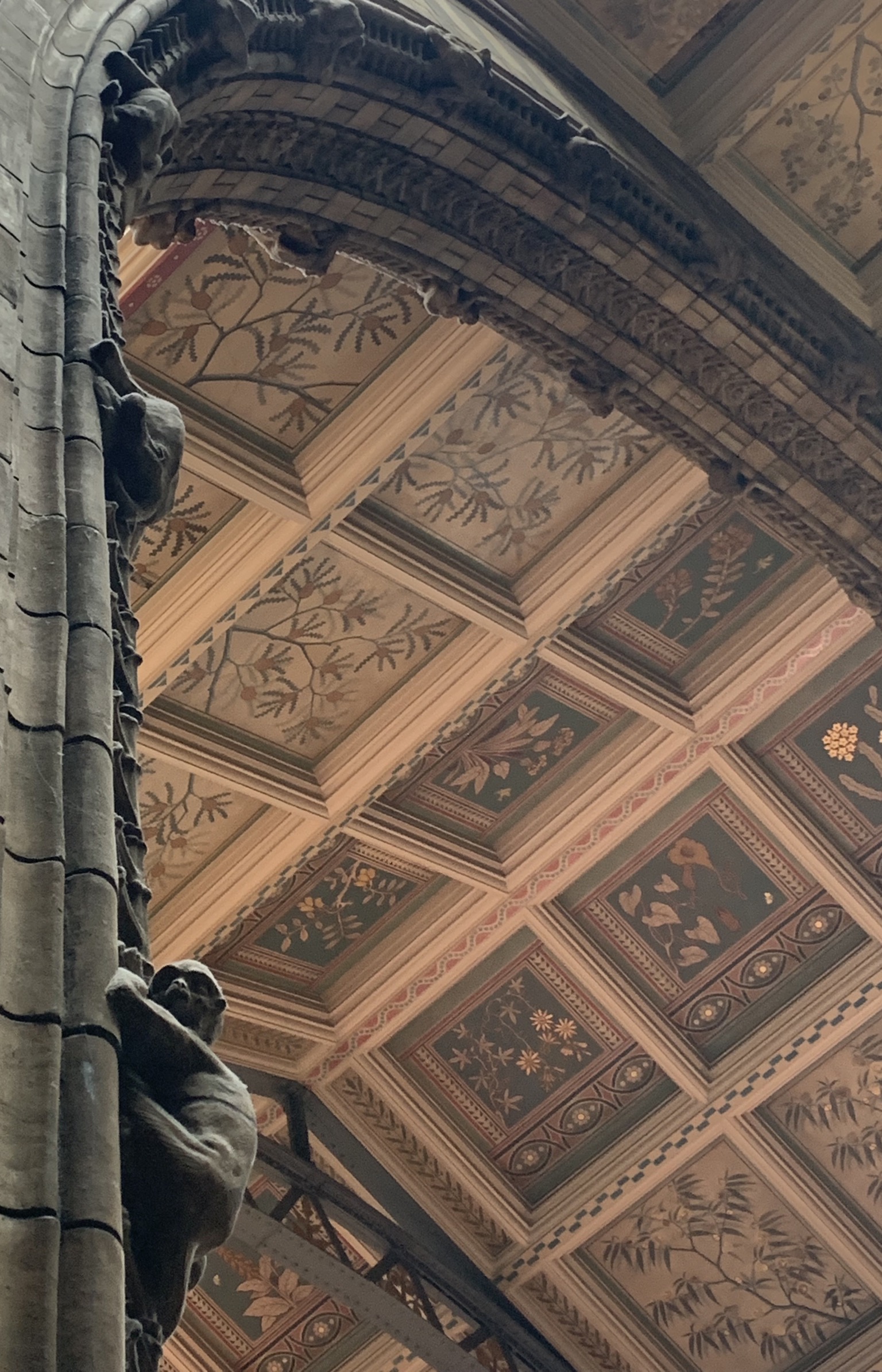 If you want to read two amazing books to continue this exciting lesson on evolutionary theory  or also a TV programme of one of the books of  Neil Shubin (yey you tube!!!! Your inner fish- , I thoroughly recommend these, not too complicated and really accessible.

The entire point of the NHM is not just to showcase dead animals and inspire awe but to let you know the message that this is OUR history, OUR planet and that we are as involved in this as anyone or anything else.